Just to get the ball rolling on this blog, I have decided to put up some photos and stories about our ferrets, one ferret a week. Although I will run out of ferrets to talk about in five weeks, I am hoping that in the meantime I will have gotten used to this blogging thing, and will be able come up with other things to post. Cross your fingers.

So without further ado, the first ferret of the week is Pandora. 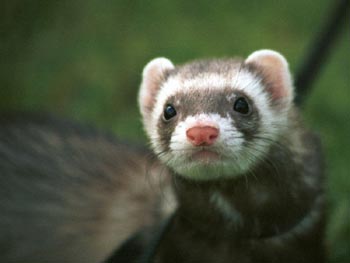 Pandora was our very first ferret. We got her just a few months after our wedding in 1999, and had not actually planned to bring her home. We were interested in getting a pet, and since we were living in an apartment that did not allow dogs, we decided that we should look into ferrets and iguanas as pets. (I donâ€™t really remember now, why we picked those two animals—I guess because they were smallish and quiet.) We decided this on Labor Day, so all the pet stores were closed, but we managed to find a local ferret breeder who was available, and decided to go do some â€œresearchâ€ on ferrets.

We should have known better. We fell in love as soon as the breeder plunked 4-month old Pandora in our arms. No matter that she was scared stiff of us (literally—sheâ€™s a bit high-strung, and goes rigid when she is put in an unfamiliar or unpleasant situation), and the breeder told us that she would act completely differently when she was relaxed. No matter that we had not purchased a cage or litter box or ferret food. We carried her home sitting on my lap, still stiff as a board. But sure enough, once she was comfortable with us, Pandora started acting like a ferret: she explored the apartment repeatedly, she stole our socks, she begged for raisins, she war danced and wrestled with us. The war dance was a bit alarming the first time, even though we had heard stories—she hopped up and down madly, mouth wide open, and tried to pounce on our hands when we reached for her. 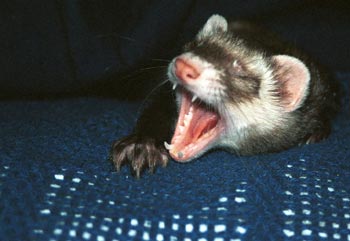